I'm guessing they can't call it an Officers model , as Colt probably has a trademark for their 3.5" barrel, &
shorter (than a typical Govt. or Commander) sized grip frame, 1911.

In any case, I'd call it a Officer model 1911, 'cause that's the best description of it's size.

I purchased my RIA Compact from a posting found on a gun website in my area. The guy I bought it from had purchased it new, as an impulse buy, then decided to sell it (before even shooting it ?) that's what he said, anyway. Upon close examination, it did appear unfired. No wear or friction marks on the magazine, barrel, slide, or frame, & it came in the factory hard plastic case, with owners/instruction manual, & an M/T .45 case.

I found the manual interesting in that it states the pistol is made to shoot hardball ammo (230 gr FMJ) ammo only.
As a longtime hand loader, I shoot cast bullets almost exclusively. I do load some JHP's and FMJ loads as well, but most my shooting is with cast bullets. (More on this later)

Took it to the range a few times, usually shoot 100 rds, thru each pistol I take, when I go to the range. Though I hate GI style sights.(.'cause I can barely see them) I was able to shoot it about as well @ 7yds as I do a Commander or Govt sized 1911..which surprised me. I thought the short barrel would have the gun jumping around more.. I was actually able to group them in & around the bullseye (about 1.5" in dia.) which is good shooting (for me). I love to shoot, but never claimed to be a great shot..
I shoot to have fun.

Didn't have any FTE or FTC in the first 500 rounds,..( the manual suggests a break in period of that amount) pistol seemed remarkably tight (slide to frame fit, & barrel lock up) Trigger was OK, out of the box, hated the cheap wood grips & replaced them with Hogue rubber wrap-around grips (with finger grooves).. much better. Barrel is a bull barrel, flared by the muzzle (no barrel bushing) & take down is a bit different than the Govt/Commanders I'm used to..there's a bushing the FL guide rod goes into, that complicates things a bit, 'till you get used to disassembly. Once learned, it's as easy as any 1911 to break down.

After shooting the break in rounds, I started trying different cast bullets I had loaded for my other 45's..I started to get a lot of FTF.. ejections weren't a problem. The rounds had fired in all my other 1911's, (Govt. & Commander sized models) I tried 230 RN, 230TC , 200 SWC & TC's, 185 swc's, and even 155gr swc's (shaped like a Hershey kiss chocolate drop).. All the cast bullets would chamber only about ..90% I could usually push the slide closed with my thumb & it'd fire, but hey..somethings wrong! (don't know why I didn't think to do a prop test in this barrel, but I didn't) After my last frustrating attempt to shoot cast bullets @ the range, decided to take it to my gunsmith, for him to take a look @ it. He quickly noticed the slide was hanging up a bit on the dis-connector.. he filed a bit on the underside of the slide, to angle it a bit where it contacts the dis connector, then he removed the disconnector & polished it's tip , in case there was any roughness on it's surface. This helped smooth the slide's action, but test firing, still wouldn't go completely into battery, after firing first shot. He miked my reloads & they were in spec..I'd switched from RCBS to Lee dies, so I could use the Lee factory crimp die ( & stop having to re- tighten the decapping pin on the RCBS dies!)

Next he removed the barrel & using a go-no go gauge, determined the front of the chamber was a little too tight...a bullet wouldn't drop in as far as it should, and when inverted, the round would stick in the barrel, instead of falling out. Got out his chamber reamer & opened it up a bit. Repeated test, & was still a little tight, so reamed a bit more.Washed out barrel & reassembled. Test fired & it ran like it was supposed to.. Slide was failing to lock back, so he suggested I try a different slide lock, as I said I had a few in my parts stash. Apparently he tweeked the sear spring a bit, cause the trigger is a bit nicer (lighter) than it was, Hope to put a few rounds through it later tonight or in the a.m...

So in conclusion I was a bit disappointed to learn that the chamber wasn't reamed properly from the factory. But that may not be true.. the pistol did function as it should with FMJ ammo, it was only a problem when switching to cast bullets. Not sure what was going on with the disconnector. Didn't seem to be a problem initially, then with use, became evident it was causing drag against the slide.I've owned a fair number of 1911's over the years, the problems I encountered were a first for me, frustrating when attempting to shoot cast bullets, but the manual does state it's made for FMJ's..so maybe I'm making it more of a problem than it is. Gunsmith explained the cast bullet may be sized a little larger than the FMJ's , causing the problem.. I'm looking forward to putting some more lead down range, just to make sure it's ready to eat whatever I feed it.

Sounds like your story has a happy ending. Thanks to your gunsmith you now have
a nice piece. My advice, keep them both and enjoy them both.
Zeke

I keep cards for my gunsmith in my shooting bag..
Whenever I see someone having an issue with a firearm, I offer them his card & describe some of the (many) issues he's fixed for me..
as well as friend's issues, that I've referred to him for problem solving. (He's fixed them all)
I'm fortunate to have a world class gunsmith so close to me..he builds race guns for some top level competitors.
In case you're wondering, his name is Doug Jones..& he's well known for his Acc-U- Rail system.
here's a link for the curious: acc-u-rail.com

though I don't put enough rounds thru any of my 1911's to justify having one railed by him,
he's solved many issues I've had with pistols, revolvers, rifles, & shotguns. I've watched him working & been impressed by watching him..
I learned he was a machinist, before he became a gunsmith.
Besides, he's an old motorcyclist..like me.

joepistol said:
I keep cards for my gunsmith in my shooting bag..
Whenever I see someone having an issue with a firearm, I offer them his card & describe some of the (many) issues he's fixed for me..
as well as friend's issues, that I've referred to him for problem solving. (He's fixed them all)
I'm fortunate to have a world class gunsmith so close to me..he builds race guns for some top level competitors.
In case you're wondering, his name is Doug Jones..& he's well known for his Acc-U- Rail system.
here's a link for the curious: acc-u-rail.com

though I don't put enough rounds thru any of my 1911's to justify having one railed by him,
he's solved many issues I've had with pistols, revolvers, rifles, & shotguns. I've watched him working & been impressed by watching him..
I learned he was a machinist, before he became a gunsmith.
Besides, he's an old motorcyclist..like me.
Click to expand...

You know what they say: " There are Bold Motorcyclists and Old motorcyclists, but there ain't many Bold Old Motorcyclists". I can't figure out what side I fit on. I know I'm old and used to be sorta bold.lol

Good reporting and useful information. Thanks. I've known about
Acc-U-Rail for many years, but never looked at his website, until now.
I've saved the link and am looking forward to making and keeping in contact with Doug.

I was surprised to learn that after I met Doug, he told me most of his business comes from other states..He gets guns (mostly 1911's & other pistols), shipped to him several times a day. He doesn't advertise..which is obvious if you see his website...not a lot of information on the other services he provides. I've tried to generate as much local business for him as possible for several reasons..I want him to do well, as he does fine work @ what I believe is bargain prices, (compared to what some 'smiths charge) on top of this, he's a competitive shooter..competes in 3-gun matches. I always get a good laugh, listening to him describe how he does in his shoots, as he's already in his 70's & he complains he can't win because he has to compete against younger guys..& there's running involved.

Here's an update on my pistol, written about a month ago.:

Took my RIA M-1911CS (aka officer model-sized 1911) to the range yesterday.
Took along 185 gr Bayou coated swc's. & some 230gr FMJ loads, as it's been awhile since I shot this pistol.
Pistol functioned flawlessly..no FTFs, no FTE's.. was surprised @ how well it shot, with both loads I tried.
The white paint I used on the top of the front sight allowed my eyes to pick up the sight against a black bullseye on my target.
Able to blow the center out of the bullseye @ 21 ft.. which is good for my eyes & shooting skill.
Began thinking how little I'd done to this pistol, & how well it shot.
Well, in all honesty, Doug's tweaking did a lot to improve the cast bullet feeding..

I should add, I swapped grips & this now wears some aggressive textured G-10 type hand stocks.

I really had no need for this size 1911.. I bought it just to see if the criticism I'd read about the short barreled (3.5") 1911's
chambered in 45 acp was factual & I now believe it may just be OPINION..not based on fact.
Doesn't seem like my inexpensive RIA M-1911CS needed much to get it reliable & accurate.
In actuality, it did pretty good shooting FMJ Ball ammo, before Doug's tweaking.
Now it eats anything I feed it..
So, that's my update..

I still dislike the FL guide rod /bushing system used on the bull barrel this pistol has, makes taking it apart more of a chore..
but also wonder if it's a reason that the pistol delivers greater accuracy than I would have expected, in such a short barrel.

I have the same pistol. Adding the white paint dab was one of the first things I did to it. My old eyes have enough problems. I agree that short barreled 1911's in .45 acp. is just an opinion from some folks. I'm not what you consider to be a he-man by any standard, and I don't have a problem with recoil or holding on target. Enjoy.
You must log in or register to reply here.
Share:
Reddit Pinterest Tumblr WhatsApp Email Share Link 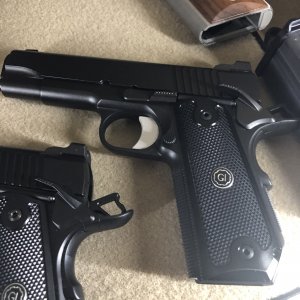 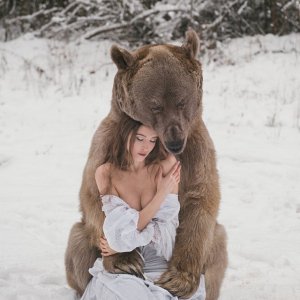 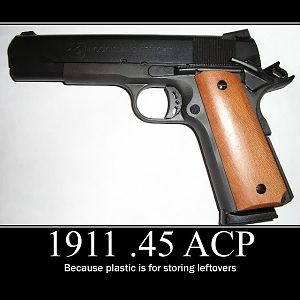 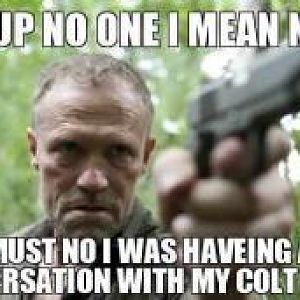