Guns You Cherish The Most

I have been in a Gun loving family my whole life. My Grandfather provided food for his family and other migrant workers during the Great Depression with his trusty .22LR. He later went on to win the Grand American in the late ‘60s and was regarded as one of the best trap shooters in the Nation for many years. He also started a few gun clubs in Southern Cali as well as help run the club where the ‘84 Olympic Trap events were held outside LA.

These two guns were given to me by my Grandfather. I lusted after them for many years while growing up watching Bonanza. It was the closest thing I could get to a Cowboy set at the time.

Of all the guns I own these two have the most sentimental value and the Marlin lever 22 has been in my hand the and shot the most of any gun I own. These will be the last two I ever let go of and hopefully will go to one of my Grandson’s some day to continue the tradition.

Really didn’t come from a gun loving family. My father had a snub nose .38 that he took to Vietnam as home protection. Later my brother and I turned him into a gun lover. No family heirlooms to pass along. We’ve given more guns to my dad over the years.

Since there are no family guns to pass along, I will pass treasures on to my daughters. The two that I cherish the most are below. Both for different reasons, but cherished none the less.

Nice, a 3 screw Ruger! A couple of years ago, I bought one from a friend, was made the year I was born. I love shooting the old Ruger, so much, I plan on getting one in an adult caliber in the somewhat near future.

Fred_G said:
Nice, a 3 screw Ruger! A couple of years ago, I bought one from a friend, was made the year I was born. I love shooting the old Ruger, so much, I plan on getting one in an adult caliber in the somewhat near future.
Click to expand...

I had a Ruger Black Hawk in .45 Long Colt of the same vintage. It was new in box when I received it also. The caliber just never did anything for me.

Looking for one that also has the .45ACP, .45 LC will rarely be shot by me, need another caliber like I need a hole in the head.

Okay, these are the top three-

All of my father's guns were stolen when I was a teenager so I don't have any that I've inherited from him. But I do have the guns he gave me when I was a kid, including my first real gun, a Savage 24J .22lr/.410, and my first handgun, an H&R 676 .22lr/.22mag convertible. They've each got about a million rounds through them and they still see use around the farm.

This one isn't mine anymore. It's a Colt Commander that I had built as a gift for my son when he earned his way into spec ops, a way to commemorate his military accomplishments. There were issues with the build that almost derailed the project but it was saved by Brent at the Colt Custom shop and it came out beautiful. This Colt ORM 1991A1 .38 Super/9mm/9x23W is the first full build I had done for myself. It was done by a talented young 'smith, a local guy, and it came out perfect. Love this gun. Only gun that has any real special meaning for me is a single shot 410 shotgun mom and dad got me when I was 10 and a bear whitetail compound bow they got me when I was 12 I currently do not have any pictures but will put one up when I get a chance to take one.

I am currently working on my collection to build it up to pass along to my offspring and hopefully start the tradition of family provenance!

My dad's Colt Govt., left to me in 1995. I waited too long to soup it up a little. He would have taken his files to it a lot sooner.
It runs great in matches.

It’s funny how a lot of the time our most prized possessions have the least monetary value and I’m definitely no exception to the rule.

This was my dads 67A that he bought himself (10yrs old)from the local hardware store back in 1956, it was in pretty rough shape so my son and I cleaned it up a bit. 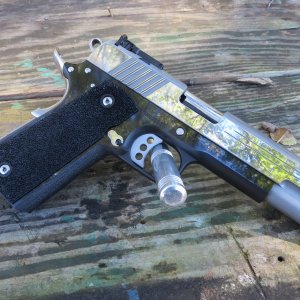 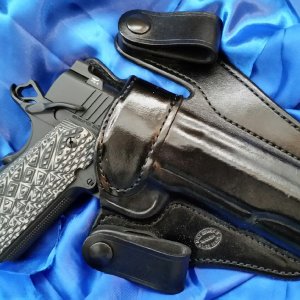 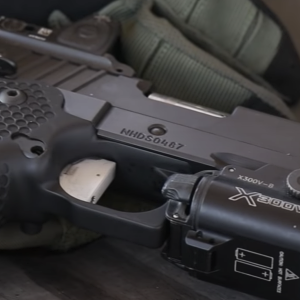 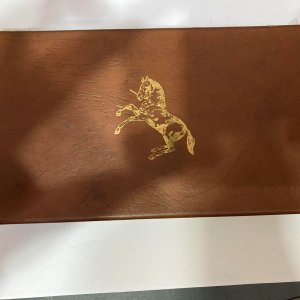 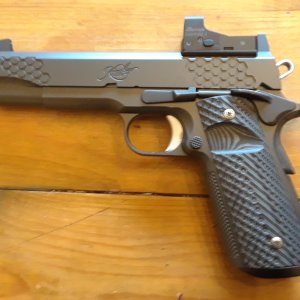 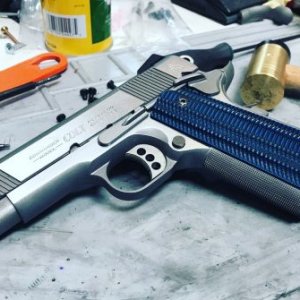 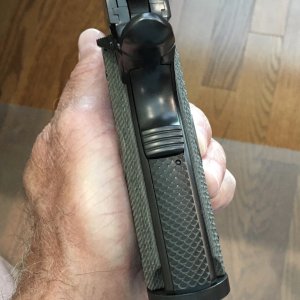